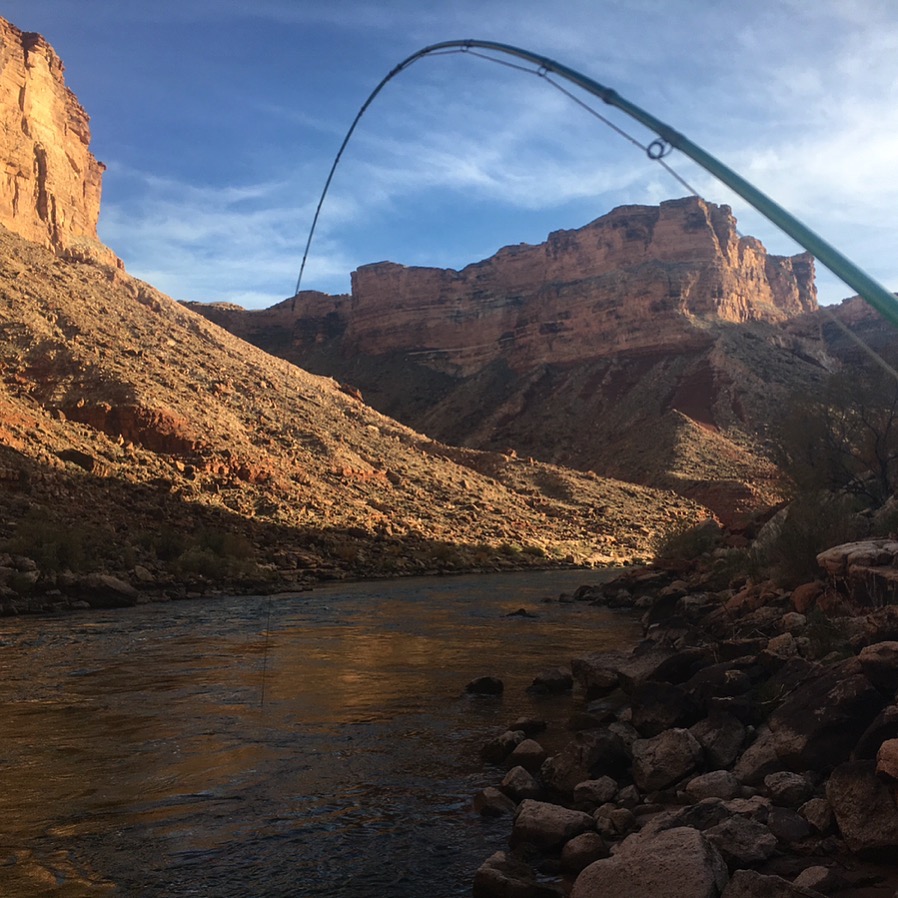 Across most places in the U.S. fall fishing is beginning to give way to the dog days of winter, however in Arizona peak fishing season is just beginning. This is the time of year when the tiny mountain streams scattered across the state freeze up and access to the mighty Colorado finally becomes cool enough. Throughout all of the summer and early spring/late fall the access into the canyon itself is too hot to sanely use any of the routes into the canyon other than poaching days at Lees Ferry. Many who fish the famous waters of Lees Ferry beneath the towering Glen Canyon Dam would also say they have fished the premier trout water of Arizona. I could not disagree more. The ferry is just a shadow of the possibility that lurks in the reaches of Marble Canyon. Every riffle and eddy in this huge stretch of water is filled with trout, and not your average trout either. These fish are strong, river bred wild trout. These trout have never seen a hook and many have seen no more people than those floating downstream above their heads. This is the 50 fish a day place (except when its not). The reason it is not popular is access.

This trip began like many others, drive to a spot where the road ends. The road ends not for a lack of effort from the builders, but because the river draining the Rockies passes by just beneath. Beneath is the correct word to describe where the river runs. On the rim where we camped, silent desert. The occasional Junco calling in their group as they search the empty landscape for scattered seeds. Twenty feet from the truck, the canyon edge, and the relentless roar of a river cutting ever further from us. A river forever getting less and less attainable, always getting harder to access.

The upper reaches of the canyon is devoid of any true trails, instead the area is full of “routes” to bring you from rim to river. Side stepping pour-offs, walking down side canyons, hopping boulder fields and taking advantage of faults in the canyon walls. This is a place where you will see more Big Horn Sheep tracks than human footprints.

The last half of the canyon seems to take forever, as though the hard part is over and the river should be waiting for us right there. That is not how the canyon works. If it gave up its secrets that easily, then the magic would be ruined.

The river came into being in the sound of a distant roar, 10,000 cfs or so pounding over huge rocks washed into the main channel from colossal floods the rip down the path we were currently on. 99 days out of 100 this canyon is so dry it barely supports life. The one day it is wet it certainly destroys much of the life it has. It truly makes you respect the kind of critters that can make this place into their home.

Finally we saw the aqua-blue-green shades of the river. Framed by the red/tan walls and thin strip of Tamarisk green/grey at the bottom. Hanging suspended in the clear, swirling currents are black shadows. Some right at the bottom, others in the middle of the water column and a few more breaking the surface to snack on tiny midges.

My first three casts of the pistol pete yielded bites from aggressive little bows. Kayla walked in and got one on her second cast. It was going to be one of those days I guess!

The fishing was lights out, everyone hit the water and a double or triple was not uncommon, we even had a few quadruples. We fished the slower waters above the rapids for fish sipping dries. Picked pocket water in the rapids with nymphs. Swung buggers on sinking line in the riffle tailouts. It was one of those days that makes you wonder how you fish anywhere else (the walk in reminds you why). It is an incredible setting to fish in, I often find myself looking up at the walls around me halfway through tying on a fly. Hoping to catch a glimpse of the elusive Big Horn or a passing hawk.

That night we had trout for dinner, whitish pink meat crusted in garlic and pepper. Don’t sleep on eating the skin and the cheeks,they are the best parts!

The next morning dawned cold, the star filled skies outlined by black canyon walls gave way to a pale light. It was time to grab some breakfast and get our last couple casts in!

After catching our fill of fish and checking out the last of the riffles and pockets within our reach we began to walk out. By the time we left the beach we were already planning our return trip.

We followed a set of Bobcat tracks toup the canyon, ending in a pile of an unfortunate Juncos feathers. The walk out reminded us why the fishing was so good, the way in and out was very steep.