This trip has been coming for quite a while. I have been planning on coming to this area pretty much since I found out research and fly fishing were one in the same. I have probably combed over this area on Google Earth for hours and spent even more time reading old stocking reports and fish studies, the Shangri-La of southwestern trout fishing (in my opinion) with hundreds of lakes and streams spread across a relatively small and accessible area, and I had finally been able to get a trip together, the excitement was very real!

I had convinced Kayla and Ryan to join me on this trip and spend their holiday weekend in pursuit of trout. We left after work on a Friday afternoon and sped off into the high desert of northern Arizona. As we approached the the AZ/Utah border we had a decision to make, we could continue the conventional route (167 miles) or take a “shortcut” (46 miles). With just those numbers it seems an obvious choice however the shorter route was lacking pavement, but if it was a nice dirt road would save us an hour or so. We decided on the dirt road, topped off the tank in Page and headed off into the desert!

The road was good for the most part and we were racing the sun through an amazing canyon. The walls almost constantly changing and the road wove between giant fins of rock like the vertebrae of some massive animal half buried in the ground. Before long it was dark, but a full moon kept the area illuminated and threw wild shadows off of the canyon walls. Other than quite a few cows (thinking we were the feed truck), countless jack rabbits and one pair of dog walkers we had the road to ourselves and made good time.

It seemed like no time at all and we were in a grove of aspen setting up a hasty camp and going to bed. On a side note the shortcut actually worked and we saved about 45 minutes! The next morning we were greeted by sunlight filtered through aspen leafs and a little creek tumbling down the valley. One look at the creek showed there to be fish in it, but it was not what we were after. I had a goal of catching some Colorado River Cutthroats in their native waters and we drove just around the corner to a little tributary.

The flow was not quite clear and the brush thick but those are often the best waters. We rigged up a variety of dry flies and pushed into the brush. It wasn’t long before Kayla shouted she had caught a fish! Always good to get on the board early, it was a beautiful little 8 inch cutt that had taken the dropper.

Shortly after Kayla got her first fish I was on the board with my first of the trip. I must have missed 5 or 6 fish in the little pocket I was fishing before hooking my first fish. The very thick undergrowth and fast current was giving me a heck of a time. The fish I managed to land was very pale, but seemed to match the sandy creek bottom almost perfectly.

Shortly after we decided to drive to the next area we wanted to fish, a lake which was a short mile and a half hike off the main roadway. Upon reaching the trailhead we found that the hike would be a little longer than expected, mainly because it was straight uphill the whole way. But the worse the trail, the better the fishing! Right? 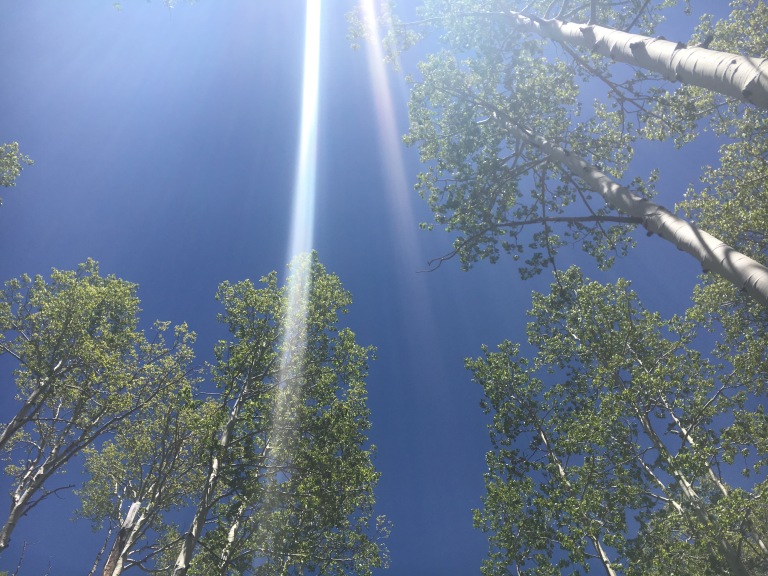 After finishing the relatively short be steep trail we came to a clearing in the aspens, a perfectly still lake with little rings popping off everywhere! I was the only one who had left a rod set up and immediately began fishing the same dry-dropper set up I had in the morning. In short order I had caught a few little brook trout and a small cutthroat! What a pleasant surprise, everything I had read about the area said this was brook trout only lake but we ended up with a third of our fish being cutthroats. The fish had yet to take the dry but seemed to love the red pheasant tail suspended about 8 inches under the surface.

Ryan and Kayla had taken a different strategy than the dry dropper, they had just gone straight to the leech and man did it work. They both set out around the lake stripping their flies along the weedy edges and before too long Ryan gave a shout he was on a big brooky. As soon as I got over to him from the opposite side of the lake Kayla gives a shout she had caught another big brook, looks like its time to switch to the leech! I had limited success on the leech but enjoyed a gorgeous afternoon at this mountain lake.

The whole mountain seemed to be coming alive after winter with so many swallows around the lake they had us worried we may accidentally hook one. Late in the afternoon we even had a show when a Peregrine came rocketing through the air looking for a swallow lunch only to be disappointed by the agile little birds. The lake also held the most snakes I have seen in a spot for some time, it seemed every 100 feet or so one of them would spook from the lake edge.

After a stellar afternoon fishing we headed back to camp talking a little bit in awe of how well the lake had just fished. Camp was wonderful, with a nice calm evening and a few brook trout for dinner (at the urging of DNR, too many brook trout in a lake makes for tiny, unhealthy fish). A full day of fishing high mountain lakes, good company, and some well seasoned fish for dinner, tomorrow has its work cut out for it to top the day we just had.