The day after Thanksgiving began like all post Thanksgiving days, lazily. A combination of too much sleep and too much food (odd that should make one feel tired). Luckily a lazy morning is the perfect pace for Rocky Point. I began the day with some sweet green corn tamales from the vendor walking down the road (delicious).

Shortly after I moved out to the shore and began casting. Today I was hoping to add a few species to my list I had caught this trip and maybe add a little size. My first few cast brought some cabrilla and a few needle fish to hand.

The needle fish continued to intrigue me with their long jaws and seemingly voracious appetite. A word to the wise, stay well away from their jaws, they don’t break skin but they are hard to get to let go of fingers! The cabrilla continued to feed hungrily on just about any pattern we threw (bugger, nymph, clouser, anything with a hook that moves). Kayla hooked into a large fish that sent her reel screaming. After a short fight we saw the large, dark sharp dart out towards open water minus the fly. Oh well, next time!

After seeing some surface action and small minnows jumping I decided to tie on a popper, just to see what happened. I reached for a size 8 Ben’s Cleanup Popper. These poppers are a fun and easy tie and have worked really well for me!

The action on the popper was fairly fast, however I was having a hard time hooking what I believed to be needlefish. After multiple passes through and no hookups (and a little bit too much attention from passing birds), I decided to switch back to the clouser.

After a few more small fish we moved down the beach towards a rocky out cropping that hopefully held a few more fish. Along the way we saw a dried up eel sitting on the shore.

We also saw a baby sea turtle make its way into the ocean. This was the first time I had seen a turtle in Mexico! We watched it make the last five feet of its overland journey to the sea and off it swam!

The next spot allowed us to wade a bit further out and fish in a sandy pocket between two spurs of the reef. We began fishing, both of us pulling clousers through the gap in the reef. A few cabrilla showed interest immediately and we seemed to have escaped the needle fish schools (a relief). My line went taunt and a larger weight than usual was attached to the end of it! This fish did not immediately run for cover like the cabrilla and grouper we had caught before. I could see the shape of the fish but it continued to elude capture with three or four strong runs. After a short (but hard) fight Kayla managed to get the fish into the net! The fish had a stunning color combination of a sea-green body with a black stripe and yellow dot near its gills. The fins were an orange color tipped in a neon blue and the scales were separated by more neon spots.

The fish had some significant teeth and did its best to destroy the pliers as I extracted the hook from its bony mouth. After a few photos we set this stunningly colored fish free and it darted back to the edge of the reef.

We continued fishing the same area until the needle fish reappeared (they are everywhere). “Ten more good casts and we are going in.” Was the decision as the tide was coming in and the water getting rougher. On one of my final cast I felt the strongest fish of the trip! This fish ran me around every rock and piece of reef it could find. It was all I could do to pull it away from one rock and it would change directions into the way I was pulling and head for another! I was slowly gaining ground on the fish and the 5 weight fiberglass rod was handling it beautifully, when the fish pulled another direction change and the line went dead… Not no fish dead, but stuck dead. Did it get my hook stuck on a rock? Did the fish get stuck in a rock? Luckily for us my dad was snorkling a hundred feet or so away and we were able to get his attention.

He swam his way over and we explained our situation. He dove down about 5 or 6 feet to the fish. It had gotten in a small pocket in the rocks and puffed its fins up to be well and truly wedged in the reef. Luckily the presence of a really big fish (my dad) seemed to scare it out of its hiding spot and we were able to net the fish! My first trigger fish on the fly! I see why people target these hard fighting and wily ocean fish! Not only are they a lot of fun to catch, but they are quite pretty. A dark bodied fish with blue edges to its fins. Their jaws are also quite toothy and make an impressive clacking sound when the bite down!

My introduction to salt water fishing was a lot of fun and I will definitely be coming back to try my hand at it again! A final evening of bocce ball and Tecates and back to the States, not a bad way to end a trip eh? 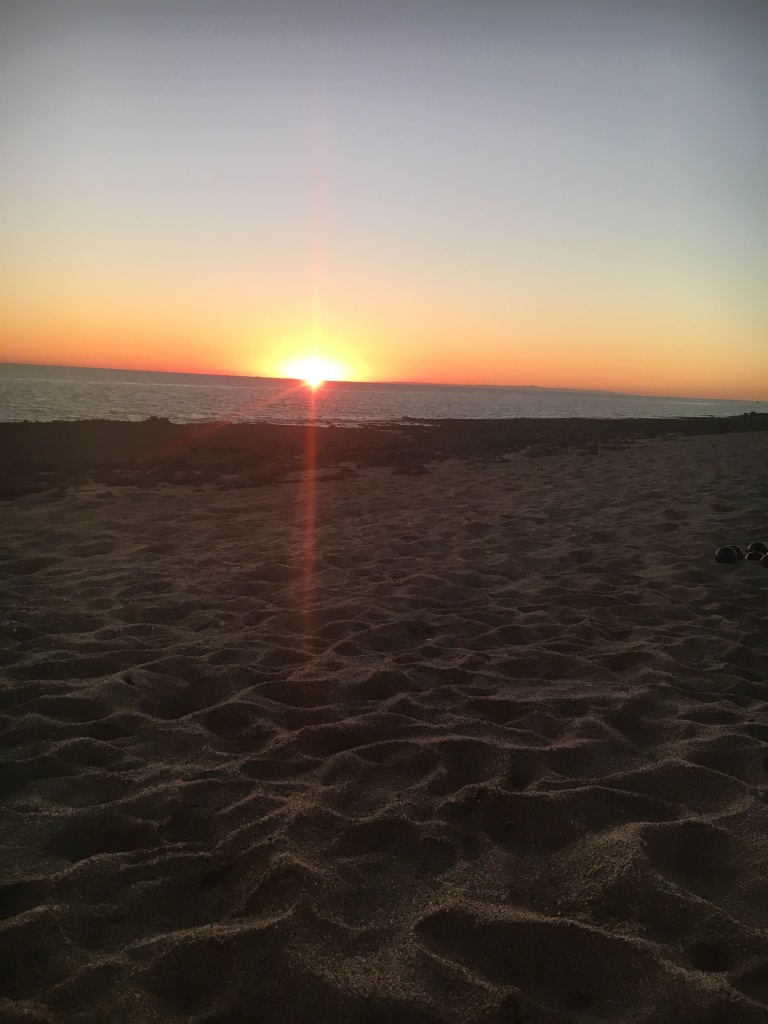