While summer in Arizona is never far off, in the high country fall can also come a little early. To take advantage of the final days of summer Kayla and I headed down to one of our favorite rim country creeks. With dreams of wild trout on foam bugs we left Flagstaff early and made our pilgrimage to the rim country two Saturdays in a row.

The weather was incredible, mid-seventies and not a cloud to be found, After a longer than expected car ride and a short hike we were into our own section of water. Other than some fearless Stellars Jays and few squirrels we had the place to ourselves as we began to move upstream.

The dries did not start hot, nor the nymphs. In this case I always turn to the San Juan worm. Call it dirty, say it isn’t fly fishing to dredge San Juans through pools, but it works and I’ll keep using them if thats what the fish are eating! A few hits and one fish on the worm did not quite make up for the amount of time I was stuck to the creek bed and the dropper was removed. After the sun had a few hours on the creek the need for the nymph was eliminated and the fish were looking up!

From just downstream I heard Kayla shout and she had hooked up on the first fish on the dry. A pretty little brown that snuck out of a less than likely looking run.

After a quick photo the brown rocketed back to its hiding spot.

Over the next few pools and likely looking runs we had a few misses and a few long distance releases. I’m not always a barbless hooks kinda guy, but on some of these small creeks I try to keep in barbless to stress these little guys as little as possible. It may lose me a few fish but it keeps the fights a little more interesting as well!

My fish of the day drifted lazily out of a rock/log jam and slowly sipped the fly off the top, turned his head and I set the hook! The 14-15 inch brown quickly wrapped me around a small stick and as soon as he was on, he was gone.. next time. The Stellars Jays that kept moving up the creek with us seemed to have a good laugh at my frustration.

A few small fish later and Kayla cast into some likely looking pocket water next to a large rock. Seconds later and the largest brown I had seen in this creek came out and smashed the hopper! A short fight and it was over, the fish slipped the hook.. but I guess thats the reason it has gotten bigger than the rest in this creek. The video shows just how short lived it was, but always good to see a larger resident of the creek!

The rest of the day brought a few more fish to hand. Each had good color and a few were highlighted by fiery adipose fins. 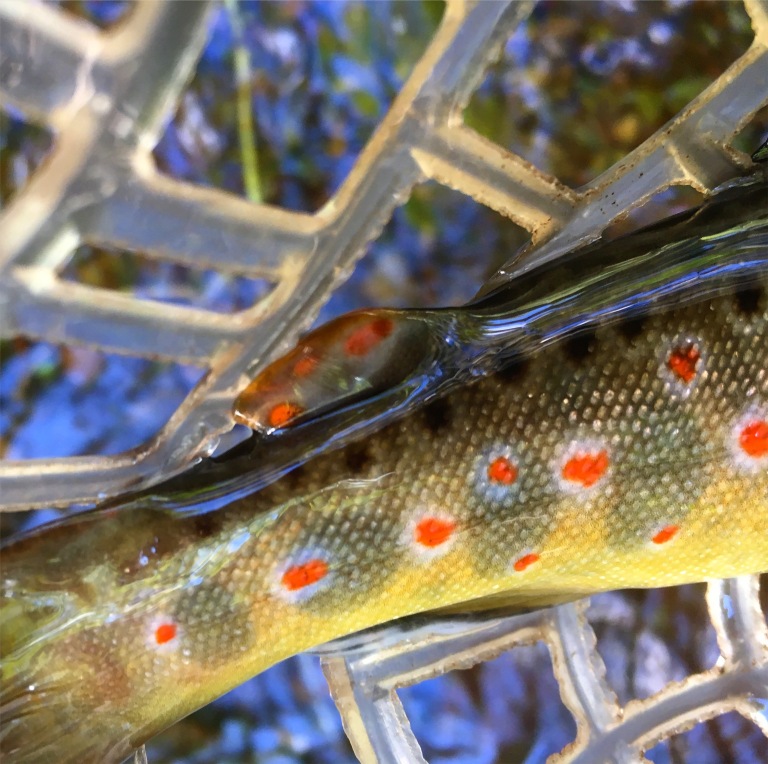 I’m not sure what the fish were mistaking the mini hopper for because I did not see any true hatches on the day. A couple scattered stonefly casings and a few caddis showed up throughout the day with no true rhyme or reason, but apparently that did not matter to the resident browns of this small creek. 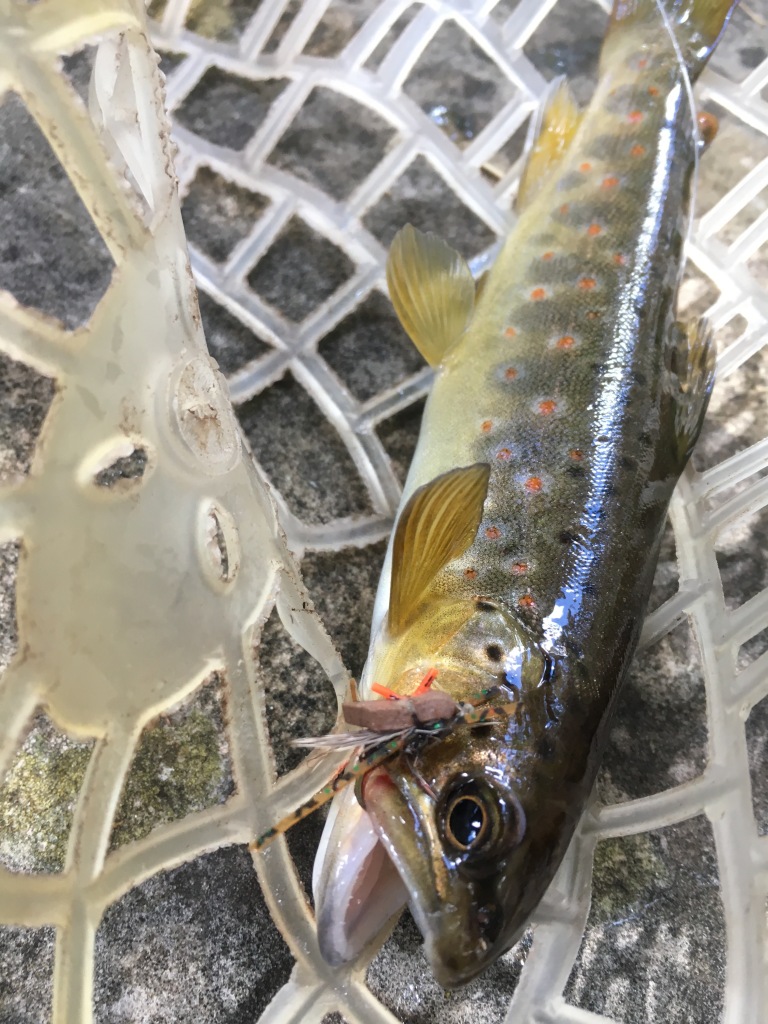 The leaves had not yet begun to change however there is the feel of fall in the air in the rim country. The trout had begun to feel it too and were coloring up and waiting for the trees to match their spots.

The last weekend of summer was all I could ask for, warm weather and trout looking for foam hoppers. I’m looking forward to some fall streamer fishing but the days chasing fish in skinny water with big foam bugs will be missed!