Quick disclaimer, I know this is posted in August but occurred in May I just had to wait until I finally had a site to post it to!

The end of May always has me feeling restless, the high country has shaken off the cold of winter and I have been itching to fish, but the local creeks are still swollen with snowmelt. This past winter was good to us in Flag and its effects are being seen in creeks all around us. While the high water is great for the creeks and sometimes the fishing, I was ready to try somewhere new that would be running clear. With the Colorado far too hot for any of the usual trails it was time to go after a species I had not yet caught, the Apache Trout.

After spending a week convincing my girlfriend that this dry looking creek will probably be home to a genetically pure strain of Apaches, she graciously agreed that our weekend could be spent chasing these spooky trout. Friday could not come fast enough, and when the sacred 5 o’clock hour finally came we hastily packed the car and headed the four hours to the trailhead. After a cold nights camp amongst the aspens (minus any headlamps, see hasty packing) we woke up with the sun and began our preparation to find the creek.

The two mile hike descended (steeply) for most of its length, winding through aspens and firs at the top before descending into maple and pine woodlands at the bottom. The trail was steep and the ground wet, with water seeping out at every switchback. What an odd hike compared to my usual Arizona outing, the lush greenery and constant seeps were a nice change of pace.  When we had reached the bottom of the canyon the creek bed was dry (shocker).

At this point my girlfriend began doubting the existence of water, let alone trout. We began heading upstream and finally came upon a small creek that vanished into the ground where the bed rock ended, looks like we made it! Rigging up the fly rod I went immediately for the dry (who wouldn’t) however the fish sat on the bottom of the creek and watch my flies drift by, I guess it was still a bit cold. We switched up tactics and I put on a brassie/copper john combo (more of a crappy brassie) and on the second cast I had my first Apache trout on the line. After a very short fight (more to untangle the fish from the branches it had run through) I had the fish to hand. After a quick photo it was back to the water and the fish darted back under its log home.

As we moved upstream to the next pool the sun found the valley bottom and the bugs began to hatch. It was time for some dries. After switching the trusty nymphs for a purple haze (me) and a royal wulff (the girlfriend) we began prospecting the next small pool ahead of us. The fly landed in an awkward presentation due to difficult casting in tight quarters. Luckily it did not matter. A fish darted the width of the stream and snatched the royal wulff off the surface. The next pool up we found that the purple haze was a one cast wonder as well. It turned out the fish were interested in just about any dry fly if they could fit it in their mouth.

The day quickly turned into one of my favorite I have had on the water. It’s hard to have a bad day fishing but that day gets even better when you are not only the only people fishing, but the only ones at the creek that day! The fish were small but colorful and healthy. The further up the creek we went the better the fishing and the scenery became. With dense maple, oak and pine crowding the small creek. The fishing, where you could make a cast, improved more and more as we moved upstream. The trout would attack the dries like little golden darts, sometimes coming fully out of the water to take (or miss) our flies. 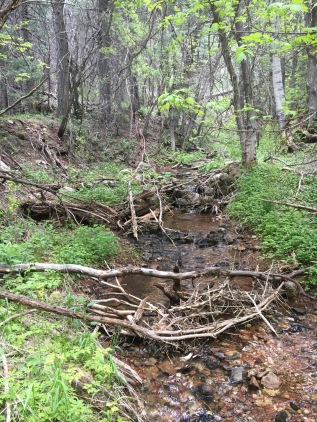 Skinny water and lots of obstacles!

Apache fooled by the royal wulff